Life in the U.S. / Student Spotlight

(Tim from Germany study in Wisconsin)

We have so many truly amazing and talented young students at Aspect Foundation, but certain students really stand out from the pack. Today, we are putting the spotlight on a standout student who has been making the most of his exchange year, Tim from Germany! Tim is studying in Wisconsin with the Goff family, and has been filling his year with musicals, family fun, and trips to Lambeau field! We asked Tim several questions about his exchange year so far; see what he had to say below!

What was your trip to America like?
I arrived on the 20th of August, actually three hours too late, because the weather was so bad that my plane from Chicago was delayed. Well, three hours would normally be bearable on a normal day, but if you are on your way to a new home and to your second family, then three hours seem like an eternity. My first days here in the United States were super fun, but also pretty different from what I was used to. I had to listen carefully to what people said, because even though my English wasn’t too bad, it was still hard. We went mini golfing, to an amusement park in Green Bay, went to taekwondo practice and also went up north, where I tried smores for the first time ever. All in all, the first days are very remarkable and fun, but also define either a good or bad start in your exchange year. I was lucky, my start was awesome.

Did your host family meet you at the airport?
Yes, my host family picked me up together with my local coordinator from Aspect. I felt very bad for them, because they had to wait for three hours to finally meet me, and I can imagine that, especially my little host siblings, were extremely excited.

How did they welcome you?
My host family had brought some balloons in color of the American flag and they had also made a poster that said: “Welcome to Wisconsin, Tim”. My local coordinator had made a card that had a picture of myself and said: “Aspect Exchange Student from Germany.” 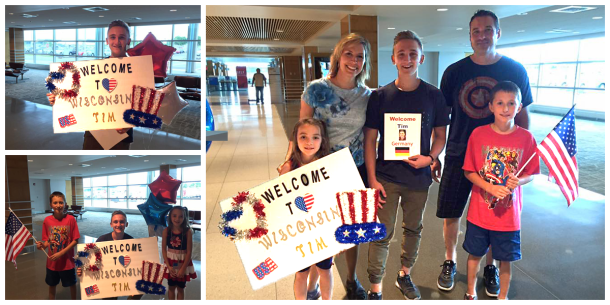 How did you feel when you first saw your host family?
Honestly, it was probably the most exciting and at the same time scariest moment in my life so far. I admit it, I was sweating really bad, but I was smiling all over the place. In that moment you just realize how brave you were and you’re just extremely glad that you finally arrived. It was definitely one of the most special moments so far and I’m sure that I will never forget this in my life.

Do you feel more comfortable with your host family now that some time has passed?
It is just natural that you feel a little bit weird the first few days if you have to ask for something and naturally you don’t take seconds at meal times, because you don’t want to take something away. You want to show your appreciation for them hosting you. However, me and my host family have and had a very good relationship from the beginning on and so with time, you feel very comfortable with asking for stuff or with taking seconds if there is enough food left. Even though it is a little bit awkward at first, it’ll be over real quick. Also, it’s just part of the whole exchange and I would be sad if I looked back and I wouldn’t have had this little awkward situation at the beginning.

(Make your own pizza night at the Goff house!)

We saw that you took part in the fall musical. It looked like a lot of fun!
Yeah, this whole musical experience started when a friend of mine came up to me and said: “Hey Tim, why don’t you sign up for the musical auditions? We always need boys and it’s gonna be an awesome experience.” Well, at that time I hadn’t thought about signing up for an activity because everything was still new and I had to figure out my new life. There was just never the thought of doing it. However, after she talked to me, I just thought that I wanted to do what I was being told all along. Just to join activities and try out something new. It turned out to be the best decision ever.

What was your role?
Since I was still scared about acting in a different language, I definitely didn’t want to sing on top of it. So I wanted a cool role that was solely acting. They gave me the part of the wolf. We performed the Enchantment of Beauty and the Beast and I was responsible for hunting Madam Rondeau. The musical was not the performance of the Disney version, but of the old fairy tale.

Were there a lot of rehearsals?
The rehearsal time started in September and our performance was at the end of November. For two and a half months we had practice every single day, including two long weekend practices. It was a lot, but I enjoyed the activity. 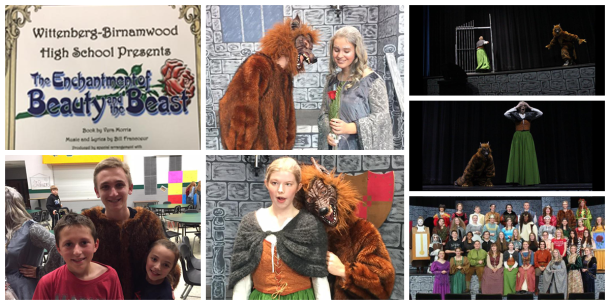 (Scenes from Tim’s performance as the wolf!)

How did the performance go!?
We had three performances, all over the weekend. To be honest, I screwed up in the first performance, because I accidentally switched off my microphone and so no one could hear me very well. Well, that is part of it I guess. However, the other two performances were perfect and to my luck, I didn’t turn off my microphone. All in all, it was very exciting and I was also very nervous on the days of performances. It was something special.

What was your favorite part of the whole experience?
My favorite part was the relationship I had with all my cast mates. It was a very special time and I enjoyed spending time with the people of the crew.

Would you do it again?
Definitely! It was an amazing experience that I wish I could do every year.

It looks like you and your host family had a wonderful Christmas together this year!
It was awesome and different at the same time! Although Christmas is a religious holiday and therefore has many traditions that are the same all over the world, there are quite a lot differences. All in all, I have to say though that I really enjoyed spending the family time with my host family and that made this experience.

Did you learn any new traditions?
Yes, some traditions are that you give gifts to each other on Christmas morning, the 25th of December. Further, the decorating of the whole house. We had so many ornaments, a blow-up snowman family, two little Christmas trees on the outside and three Christmas trees in the house. The whole house looked extremely beautiful and that was something I will never forget.

(Tim celebrating Christmas in Wisconsin with the Goff family.)

What is one memory from this past Christmas that stays with you?
One memory is decorating the house with my host family. We were decorating the whole house while listening to the traditional Christmas songs. Although our karaoke version of them wasn’t that good, it was a lot of fun and gave me the ultimate Christmas feeling.

We also saw that you went to Lambeau Field where the Packers play. How cool!
Yes, I actually went there twice. Once in the course of a field trip of a class and once with my host family and a friend. The recent one was on the 11th of February, one day before my 17th birthday. It kind of was a pre-birthday gift and we went to Texas Roadhouse after that to celebrate my birthday.

Did you get a tour of the whole stadium?
Yes, we got a so called “Champions Tour” that was about 1 ½ hours. It taught us all about the beginning of the Packers, their achievements and all facts about the stadium.

Who set up the visit for you?
We got the tickets from a colleague of my host mum. She saw on Facebook that I was an exchange student here and she works for the Packers, so she arranged to get our tickets. In case you read this, thank you so much again for the tickets!

What was your favorite part of that day?
I would say everything, the whole day was awesome. It is just awesome to spend time and have fun with your host family.

Now that you are over halfway through your exchange year, do you have any advice for students or host families?
Well, I think trust and communication is a key for a successful exchange year. In case something doesn’t work out the way it is supposed to, then talk, talk, talk. Also, things don’t always work out, and it is important to try to change the negative into the positive. Don’t give up, try to solve the problem and work on it.

What advice would you give to another student who is thinking about studying abroad in America?
I would advise him to definitely do it. It is not always easy and nice, but most of the time it is. It will just change the way you do things, the way you think. It lets you grow and makes you culturally sensitive. You’ll make a life experience of 10 years in only one year. It’s not a year in a life, it’s a life in a year.

(Tim and his host family at a color run.)

What advice would you give to an exchange student when trying new things?
Well, I would say to be open and flexible to new things. You always learn something, if you start something new. At any given moment we have two options: To step forward into growth or to step back into safety.

If you could sum your exchange year up in one word, what would that be?
Astonishing.

Now, we want to give you a chance to share any experiences or thoughts you have with our community.
Exchange is great. It’s feeling the connection between you and your host parents grow. It’s knowing in which cupboard the peanut butter is. It’s meeting people from all over the world. It’s having a place to stay in almost every country of the world. Exchange is going from thinking you know who you are, to having no idea who you are anymore, to being someone new. But not entirely new. You are still the person you were before. You know how it feels to be on your own, away from home, with no one you really know. And you find out that you can actually do it. Exchange is falling in love with this amazing, wild, beautiful country. And also with your home country.

Any final words?
Yes, I would like to thank my host family, the Goffs. They did so much for me, I doubt I can ever give that back. Thank you for making me happy, for giving me a second home. I can rely on you, I trust you and I will greatly miss you when I’m gone. You changed the way I see the world and I can’t ever thank you enough for that. Thank you for being my second family.

Do you know a standout student that you would like to see featured? Send your suggestions to publicity@aspectfoundation.org.