Adrien performs in the musical “Promises, Promises” at Charter Arts

Sometimes there are stories that just seem meant to be – strings of events and decisions that lead someone to their rightful place, dreams coming true. Adrien is one of those stories.

In 2009, after performing in a small, school play in Belgium, 14-year-old Adrien was struck with a realization. “I wanted to become an actor,” he said. “It was like something that I wasn’t able to see before, but it had always been right in front of me.” He was hooked.

“It sounded crazy!” Adrien laughed. “An actor? An actor in Belgium? But I had to deal with it, because I was sure it was what I wanted to become.”

Around the same time, Adrien developed another passion – he earnestly wanted to learn English. After reading as many books and watching as many films as he could get his hands on, he began to consider an exchange program in the U.S. “I wasn’t even planning to go for a whole year,” Adrien explained. But as he and his parents did more research, Adrien realized a full exchange year was what he was looking for. “I thought, ‘Wow, wouldn’t that be great to just go there? And that would fulfill my English learning experience!’”

And here is where the amazing part of the story starts.

One of Aspect Foundation’s faithful host dads – David, in his seventh year hosting Aspect exchange students – lives near the Lehigh Valley Charter High School for the Arts in Pennsylvania, a high school with curricula specifically for students with talents in the visual or performing arts. When he saw Adrien’s application, David knew he would be a great fit.

When Adrien got the message that he had been placed – not only with a wonderful host father, but also at a school with an intensive theater program – he was floored. “It was a miracle! I thought, ‘Yes! That’s perfect! That’s my plan!’” Adrien exclaimed. After sending in a YouTube audition, and later with an acceptance letter in-hand, Adrien began a year to change his life.

Adrien (right) in his first production in the U.S., “Noises Off”

Diane, Director of the Theater Department at Charter Arts, has been thrilled with the passion and excitement with which Adrien has approached his year. “Every day here, it’s like watching a kid on a playground,” she said. “You can just see him being served.”

Adrien dove immediately into his theatrical studies. Within a week or two of his arrival, he had auditioned for and was cast in a production of Noises Off, a high-energy farce. “It was my very first show in English,” Adrien explained. “I learned a lot from that show, because it was so fast, it was like what professionals do.” While some exchange students find it takes some time to get adjusted and meet new friends, Adrien’s intensive theater schedule created immediate connections. “I got to know very quickly the people in the school and the teachers,” Adrien beamed. “We are like a family.”

His family at school continued to grow as he and his classmates took courses encouraging mutual artistic exploration. His host family ties back home grew just as strong. 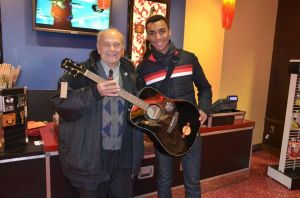 Adrien and his host father David enjoy a trip to NYC together.

Every morning, even on the weekends, Adrien wakes up early to go out to breakfast with his host father, David. David, a retired politician and life-long native of Allentown, enjoys his mornings with a group of friends at a local diner. “They talk about everything! About the U.S., about the world… I’ve gotten to learn so much!” Adrien exclaimed. “Most of them were born before World War II, they lived through it, they can remember all that happened.” Over plates of egg scrambles and pancakes, Adrien has grown closer with his host father and learned about life here.

“It’s been a really nice experience,” David reflected. “I’ve got the time and he is certainly a very committed student.” David has also had the chance to see Adrien perform, bringing friends to see his shows.

Adrien’s love of theater has propelled him to make the most of his studies. “When somebody is doing what they want to be doing… it just emanates,” Diane said. “He’s just happy. That’s what it’s like to be around him.” Adrien has tackled a role in a large musical production, learned sound design for a student-produced children’s show, and given his all in class exercises and workshops. “The acting work is so experiential,” Diane explained. “Having him representing another cultural group is always valuable in terms of our discussion of things, our analysis of things. It has been really a gift to us to have him in the program.”

The dream that started five years ago is not over yet. With his experience at Charter Arts and unstoppable passion for acting, Adrien has been accepted at Pace University in New York City next fall as a B.A. Theater major. The campus, a stone’s throw away from Broadway, will set the stage for Adrien and his dreams for the future.

“If I hadn’t done theater, I wouldn’t be here now,” he marveled. “Theater opened my mind. I think it’s the main reason why I came here to the U.S.”

A recent actor’s headshot of Adrien.