Over 4,000 miles away from home, Anna’s voice is ringing out throughout Indiana.  Anna is a Norwegian Aspect exchange student, living and studying in the Indianapolis area this school year. In addition to going to school and spending time with her host family and friends, she is blending her voice into the dulcet tones of Bella Voce, the high school women’s ensemble of the Indianapolis Children’s Choir.

Anna has only had one year of formal vocal training back in rural Norway, but she has always loved to sing. It was this passion that prompted her host mother, Julia, to encourage her to audition for Bella Voce. One afternoon this fall, Julia and Anna were at the Penrod Arts Festival in Indianapolis where the Indianapolis Children’s Choir (ICC) had a booth. “Anna said she loved to sing, that was always something she was interested in,” Julia recalled. So the two picked up a brochure and signed up for an audition on the spot. 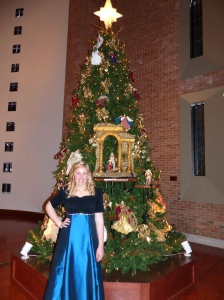 Anna at the holiday performance of Bella Voce, Angels Sing.

The Indianapolis Children’s Choir performs all over Indiana and the country, providing musical accompaniment to civic and sporting events, collaboration with world-class orchestras and performance groups, and putting on several local choral shows each year. Despite being a well-known choir in the area, Anna went into the audition with a positive attitude. “I was a little bit nervous,” she laughed, “but not too much. It was fun!” Shortly after her audition, Anna found out that she had made Bella Voce, a choir of almost 50 high school aged young women.

Meeting at Butler University for rehearsal every weekend, Anna and the other members of Bella Voce work together with director, Trisha, to hone their group choral singing. Anna has been impressed with the caliber of performance she gets to be a part of. “It’s a big difference from my high school choir [in Norway],” she said. “It’s so much more professional, and there are so many amazing singers.”

But the rehearsals aren’t all work with no play. “This choir is a lot like a family,” director Trisha explained. “The girls really enjoy being there for each other and making music together.” Bella Voce singers are also working on a community service project together outside of rehearsal, and enjoy get-togethers put on by the ICC Parents Association throughout the year. Aspect Foundation international coordinator, Andrew, who works with Anna and her host family during her year in the U.S. sees this as a great fit for her. “Anna is a very fun-loving type spirit,” Andrew said. “She’s had a really fun time with it.” Trisha agreed with Andrew, happy that Anna “always comes to rehearsal with a smile.”

Singing in Bella Voce has enhanced the international exchange experience for everyone involved. “I’ve met people from around Indiana,” Anna said. “I’ve talked to them, and heard how their schools work too.” One of Anna’s favorite aspects of being in Bella Voce is the opportunity to perform in different places around her community.

In turn, Anna enriches Bella Voce with different perspectives and training. “It is amazing to have her with us!” Trisha said. “It is interesting to see what she has learned in her previous choral experiences and introducing her to new music, new terminology and new friends.” Anna is the first international exchange student in Bella Voce since the group was reformed last year. Her participation is a daily fulfillment of the ICC’s mission statement of using choral singing for “bridging cultures, ethnicities and economic backgrounds.”

Host mom, Julia, also noted that Anna has brought the family closer to a part of their own community. Julia bought season tickets to the ICC performances, as a result of attending all of Anna’s performances anyway.

“It’s not something I think I would have ever done,” Julia said, “but it’s one of the pluses to having her spend the year with us, because it has been a wonderful experience.”

One of the largest performances for the ICC is its holiday musical concert, called Angels Sing. This year, it involved two days of dress rehearsals and recording at Christmastime, afterwards being broadcast on local television stations. “I got to get on T.V.!” Anna exclaimed, noting it as a highlight of the experience. Host mom Julia agreed. “It was just like angels singing,” she said proudly.

Aspect is proud to have one of our international angels adding her voice to the chorus in Indiana this year.

Listen to the heavenly music from Anna and Bella Voce at the ICC Angels sing, here: